Get VIP Trading Signals Market Watch
Trade Now Your capital is at risk.
Gold collapsed below 1900 early in the London session on Thursday. The commodity seems to be heading for a bearish sec0nd half of the month according to the 15 October Gold Elliott wave analysis.

October 15, 2020 / AtoZ Markets - Gold completed a corrective structure at 1933 on October 9 which seems to be the second leg of a much larger bearish corrective pattern. The yellow metal is therefore expected to be struck in the bearish territory in the coming weeks. Surprisingly, gold value is depleting, even when stock markets are down. Is the precious stone losing its safe-haven appeal? Eventually, the gold-stock divergence would resume. Technically, as the 15 October Gold Elliott wave analysis below suggests, stock prices could mount to higher highs while Gold should fall toward 1800 or even lower.

Market mood is back to risk aversion. However, this is just a minor flip. Investors have confidence that economies will have full recoveries despite Covid second wave. Central banks are ready to inject more QE. It's not a matter of IF but WHEN. Although Gold seems to be moving in the direction of the stocks, the commodity will soon go back to the status quo. Thus, while the stock market has the propensity to drive higher, there will most likely be a lower demand for the yellow metal in the coming weeks.

After a bullish run last week, Gold has dropped into the 1900-1905 intraday zone. It currently gyrates around it with momentum slowing down. 1882, 1872 and 1848 are the next target levels for sellers before the 1800 handle. Gold is playing out just as expected in the last update we used the chart below.

Wave (X) took one more leg to 1933 just as expected before it fell sharply as the chart below shows. From 1933, wave A of (Y) has started. Wave A should be an impulse wave. The price is going in conformity with this wave scenario. 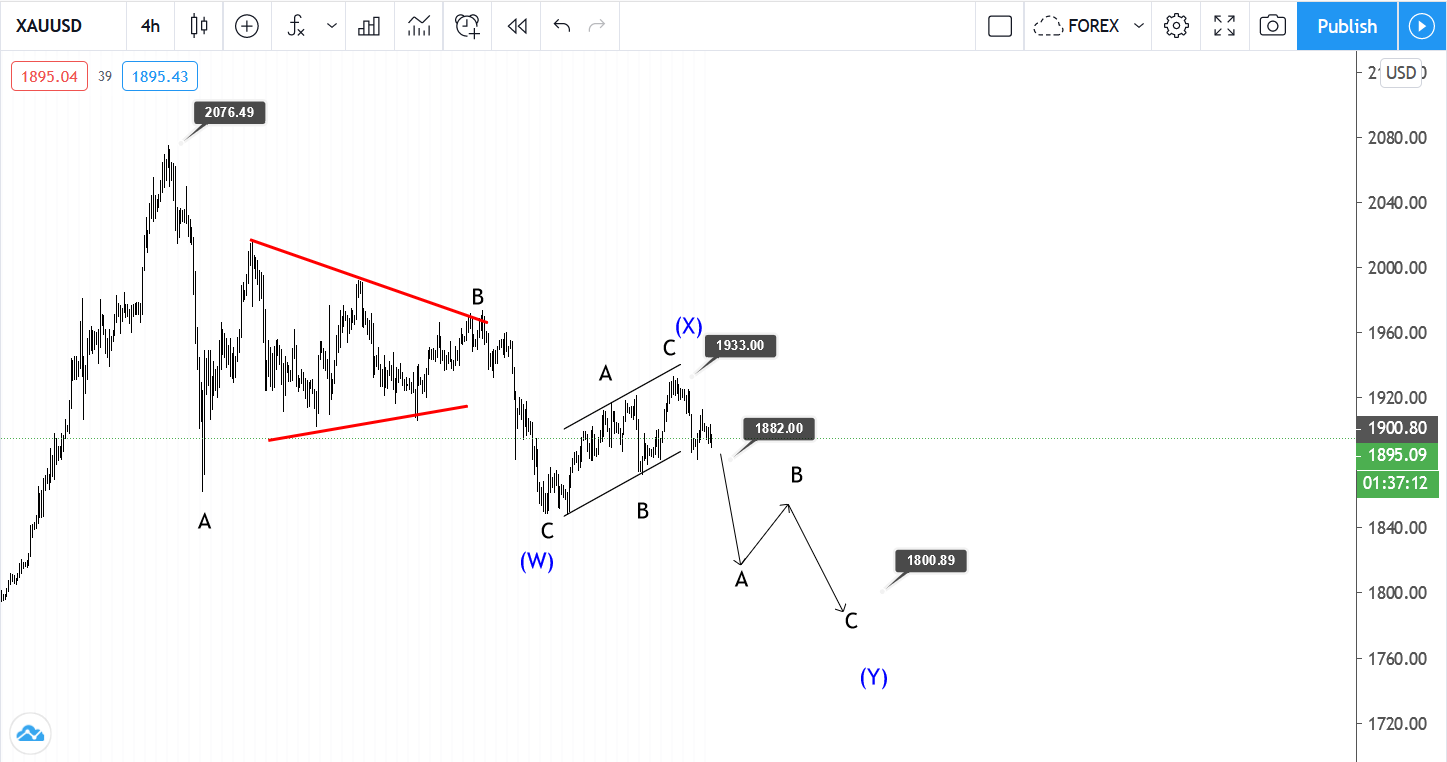 Wave (1) and (2) seem to have completed at 1882 and 1912.5 respectively. Wave (3) should then be confirmed by the break below 1882. If this happens, wave A should continue with a stronger momentum below the 1848 support level. Then, by projection, the yellow metal can hit new lows of this bearish phase. This is the expected scenario in the coming days and weeks. However, if the price stays above 1882 and breaks above 1912.5, wave (2) should then take one more leg upside. Certainly, a break above 1933 high would invalidate the larger double zigzag bearish pattern envisaged. The first scenario is far more preferred.