Bitcoin has lost more than $1000 so far this week as price heads to the lower $8000s. How deeper will the bearish move continue? The following looks at the 14 March Bitcoin price prediction using Elliott wave theory.

14 March, AtoZForex  – Bitcoin started the week a little below $10000 but now has gone far below $9000. If the current technical view is anything to believe, price could even head lower to $7000s. Toward the end of last week, price dropped  to $8300. This week started with some bullish move expectation after we had thought wave 2 long term bearish correction was over. Price reacted upward but the eventual rally was an indication that the bullish call could be premature. The result was that, price is falling back toward $8500 after a major bearish breakout.

Why was the rally termed ‘premature’? It’s simple. It was corrective. A corrective pattern almost always indicate that the prevailing trend is not over. In the last update, we discussed more and we looked at price from two perspectives. The chart below was used in the last update. 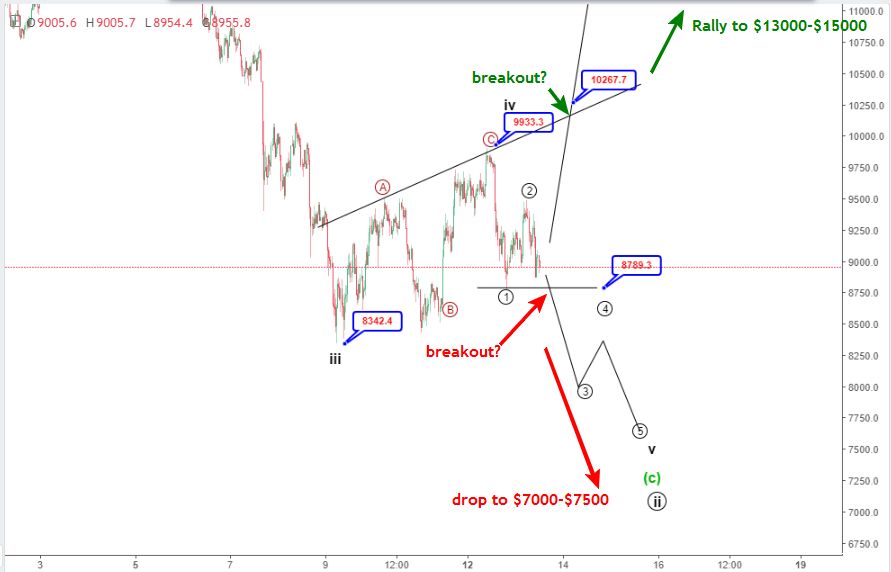 The chart above shows two scenarios owing to the fact that price made a 3-wave rally after dropping to the $8000-$8500 zone. The first scenario (in red) expect the 3-wave corrective rally to be the 4th wave of c. This means that price would take one more bearish leg downside to complete the long term bearish correction. This means that our bearish target will now be extended to $7000-$7500 if price breaks below $8789 intraday low. This scenario is very likely.

Alternatively, a surprising rally could follow despite the 3-wave bullish correction as illustrated with the green arrows in the chart above. This will ensure our bearish target in the last update still holds and supporting that wave ii (circled) completed at $8324 low. There is also the possible formation of an inverted head and shoulder pattern which supports price breaking upside. This scenario will be more preferred if price breaks above the wave a-c neckline (above $10000). If this happens, price will be expected to rally to $13000-$15000 for 30-50% gains.

It’s just as simple as that. The second scenario is now playing out as price broke below 8789.

14 March Bitcoin price prediction : what next? 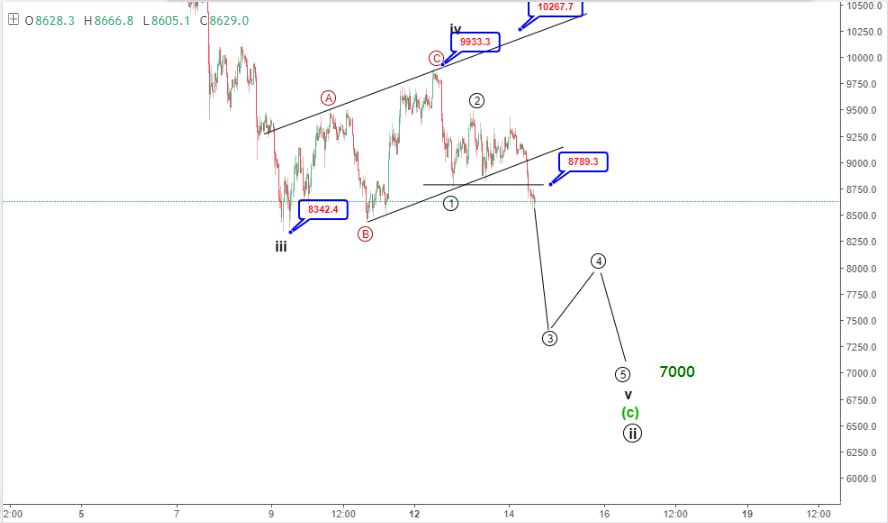 With the breakout below $8789, there is a very strong likelihood of price dropping further to $7000 or its neighborhood. If this move happens, there will be an update to look at the long term wave 2 from a bigger wave degree. Anything can happen in the market but you have to watch out for BTC at $7000 this week or next. Stay tuned for the next update.