How is black gold trading today? What will be moving crude oil price in the short term? Find the answers in this 14 August Crude oil Fundamental outlook.

14 August, AtoZForex – On Monday, oil prices have shown an overall downtrend. The slowdown in Chinese refining activity has put some pressure on the crude demand along with increases in the US shale output. The latter has suggested that the US oil supplies will most likely remain high.

Overall oil market sentiment appeared pessimistic, with Brent crude futures trading at $52.00 per barrel at 0504 GMT. The international benchmark for oil prices has dropped 0.2 percent or 10 cents from the previous session.

Meanwhile, the US West Texas Intermediate (WTI) crude futures were changing hands at $48.78 a barrel, down 0.1 percent.

Chinese refineries have processed 0.4 percent more crude oil during last month compared to the same figure of the year earlier at 45.5 million tonnes. This is about 10.71 million barrels per day, according to the data from the National Bureau of Statistics. This could account for the lowest amount on daily basis since last September. The downstream consultant with IHS Markit, Harry Lui, has commented:

“Runs were slightly below our expectations, as fuel demand growth remained tepid and stocks were brimming.”

Oil demand is expected to rise

In spite of the potential slowdown in China, the International Energy Agency (IEA) reported that it expects 2017 oil demand to grow by 1.5 million bpd. Previous IEA forecast stood at 1.4 million bpd. The BMI research has also commented on the latest developments in the oil market:

“Demand is outperforming expectations amongst both developed and emerging markets… However, global crude inventories remain bloated and there are considerable uncertainties heading into 2018.”

The research company stressed that there is a high possibility of rising supplies from the US. In fact, shale production in the largest US oil field is expected to rise by 300,000 bpd by December 2017. Permian Basin oil production is closely eyed since its rapid growth has appeared as one of the key obstacles for the Organization of the Petroleum Exporting Countries to reduce a global crude supply glut.

“WTI Crude oil is on bullish trend on any time frame above 1hour. However, on H1 and lower time frames we can see an imminent correction, supported by the previous week’s price action developments.

For the time being, we expect demand for the Crude Oil futures within the highlighted zone in the chart below. As a result, I am expecting primarily short positions until $47.63 as a primary goal. However, long positions from $47.63 could also be considered with the main entry being at $47.18 with SL of $46.00 and TP of $47.63, $48.15 and $48.84 which is just a few cents below the 50% True Fibonacci wave retracement zone. 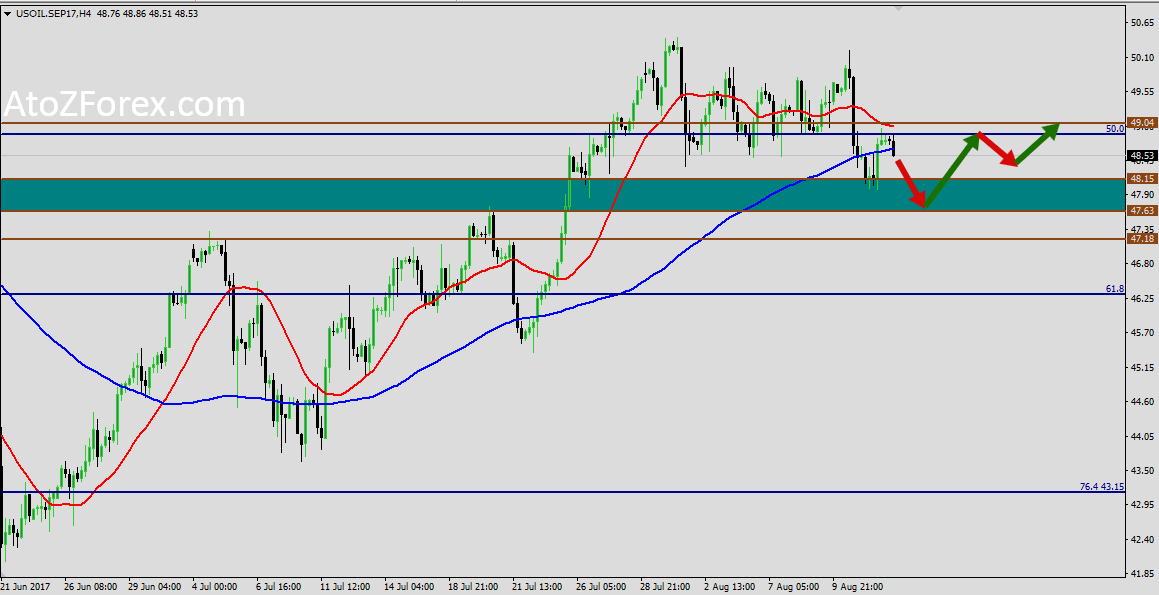 Meanwhile, if the $48.95 level is broken above, we could expect the Crude oil prices to be bullish for the upcoming two – three weeks. In this scenario, I would expect to see Crude Oil prices to reach $51.40 immediately.”