In the last two days, Monero has gained slightly against the Dollar and significantly against Bitcoin. In the 13 January Monero price prediction article below, we will analyze XMR/USD and XMR/BTC.

13 January, AtoZForex  -  Monero has gained more than 12%  and 9% in the last 24 hours to trade at $428 and 0.002991530BTC respectively.  With more than $6.6 billion in market cap, it ranks 13th on CoinMarketCap. In the last two weeks, XMR/USD has been moving back and forth to complete a triangle pattern. There was a breakout as expected. This was explained in the last update where the chart below was used.

The chart above shows a complete triangle pattern to break Up or Down. The larger trend is up while the immediate trend is down. If price is able to break upside as the green arrow shows, we may see a huge bullish move as Monero recovers completely to make a new high. If price goes down from the present position to break below as the red arrow shows, it means the immediate corrective move is not over yet and we could see more dips in the coming days.

Price broke upside and there was no enough bullish momentum to send price further up. The triangle has now morphed into a bigger triangle as the chart below shows. 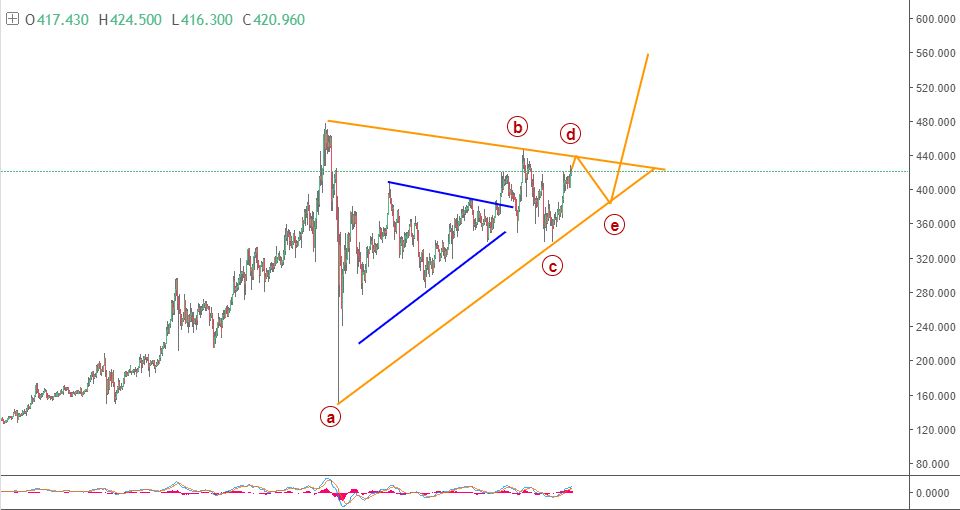 A contracting triangle converging upside means the trend remains upside. There is one more leg down before the breakout. If the breakout happens, a strong rally could follow to $600 or above. Will there be enough bullish momentum to follow through? Only time will tell though it's a very likely possibility. Monero seems to be upside as its performance against Bitcoin shows similar case below. A bullish double zigzag pattern is making way in XMR/BTC . A rally to 0.003692 is very much likely as the zigzag tends to complete. This could coincide with XMR/USD triangle bullish breakout shown earlier. Stay tuned for updates in the mid-week.