Oil prices rallied upside in the second half of 2017 following a successful Oil cut deal and implementation. Will price rally further after hitting its highest price since 2014? The following 12 January Oil price forecast shows what could be expected next based on technical analysis.

12 January, AtoZForex –  Energy commodities prices increase in the second half of 2017. The rally was basically attached to a successful execution of the crude-oil production cut agreement among the  OPEC and Non-OPEC countries. The bullish trend has continued this year after about 7% WTI crude oil rally in the first two weeks of the year capping the highest price in 3 years. The agreement was made in November 2016, came into effect in January 2017 and expected to continue in 2018. Aside the constrained global crude oil production (Supply effect), there has been a higher demand for Oil products in developing and emerging markets especially in Africa, India and China.

If this trend continues, Oil prices are expected to climb gradually. In the near term, WTI crude is expected to reach $72 per barrel. Presently, price is making a bearish correction which might continue to $58 before the rally resumes above $70. 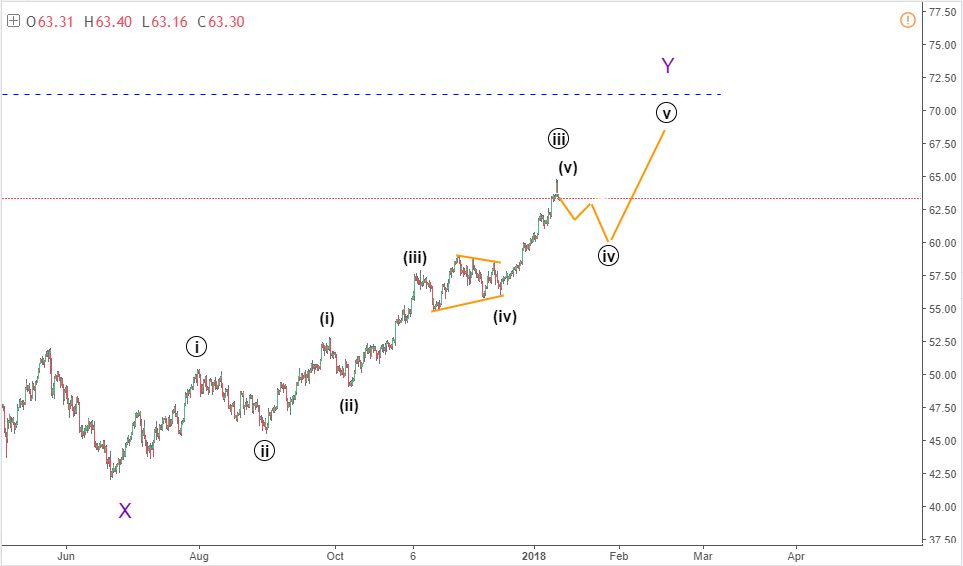 The chart above shows how price advanced since the second half of 2017. The rally is impulsive. It is expected that price would take a dip to $58-$60 before the rally resumes to $72-$75 to complete the impulse wave pattern. The patterns is also ending a bigger degree correction. Though the fundamental voice is bullish, there is a cloud of at least a near term bearishness from the technical analysis perspective especially if price moves as speculated. A rally to $72 seems to be of high probability but a dip afterward is not less probable. This could see price drop below $55 per barrel, move in a range position, before deciding the next direction. Stay tuned for the next update.