01 March, AtoZForex - In the last weekly Elliott wave analysis, we projected further downward move for the cable. The correction was expected to be shallow as a double zigzag correction was emerging.

We projected 1.2250- 1.2200 as the level of reversal. If the bearish move persists, we expect bullish resurgence at 1.2250-1.2200. A strong rally above the channel will confirm the bullish renewed strength. More updates will come during the week.

The bearish correction, afterward, appeared to have ended due to an intraday bullish flash. The fast move didn't last as price moved downside toward our projection for bullish reversal at 1.2250-1.2200. Our concern based on 1 March GBPUSD Elliott wave forecast is to know if price will get to this level before resuming upside. One this is clear, the bearish move is corrective and sideways. The biggest odds are on the bulls to resume . The chart below shows what our recent wave count looks like. 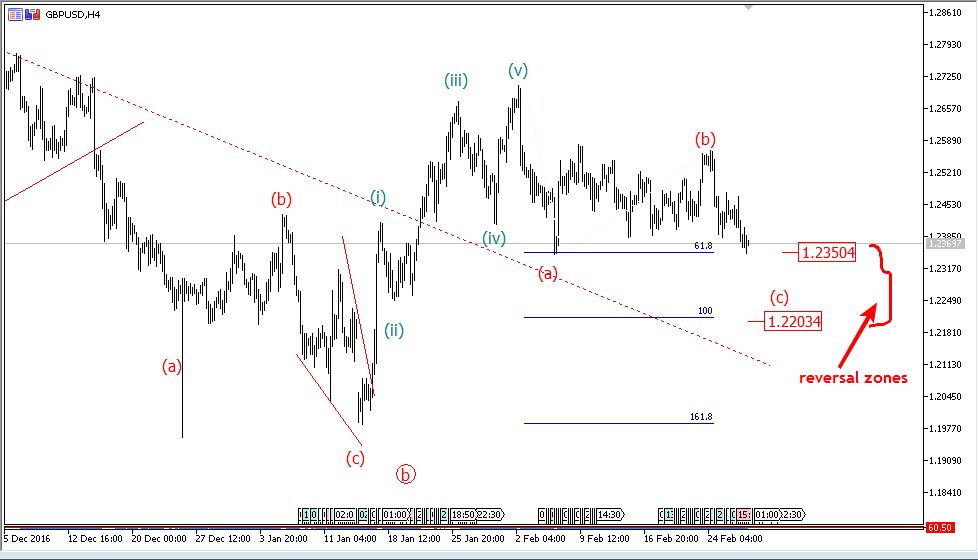 The bearish correction exhibits the properties of a zigzag pattern. It can also be liken to a flat pattern. There are two levels highlighted for bullish reversal to take place- 1.2350 and 1.2200. The former is the 61.8% Fibo projection of wave (a) from wave (b) while the later is the 100%. The correction will exhibit a flat pattern if price refuses to break below 1.2350 which is an intraday support. To complete a zigzag pattern, we will see a break below 1.2350 to 1.2200 and wait for bullish reversal signals to confirm the bullish continuation move. How do we distinguish between these two scenarios?.

The chart below shows 1.2479 as an important intraday level. 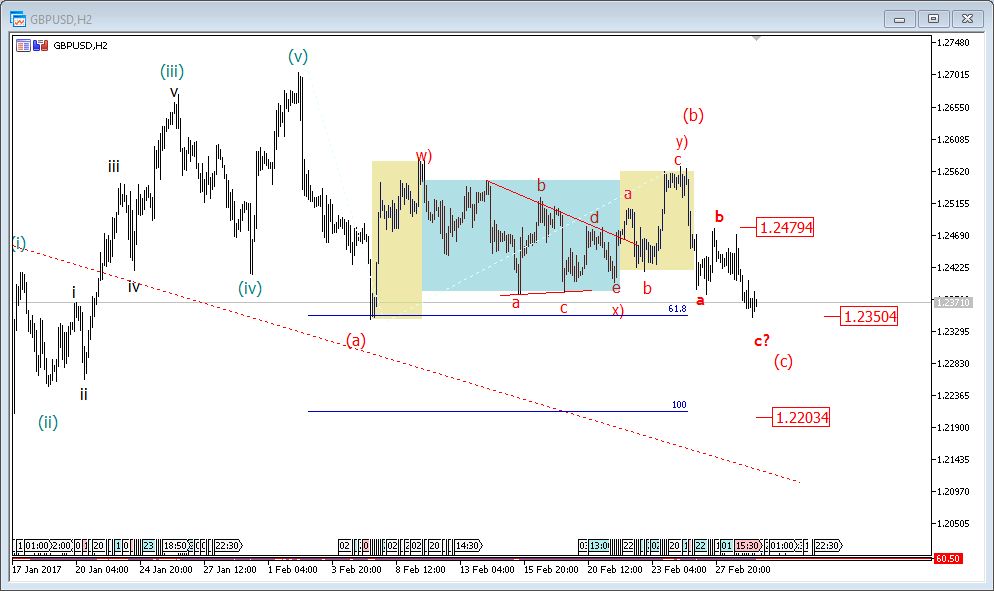 If price breaks above 1.2479 while still staying above 1.2350, we may have a good case for a flat pattern. Though the c-leg doesn't look motive at the moment. An intraday ending diagonal should be expected with wave a-b-c and wave 1-2-3. Price can make a brief break below 1.2350 but a strong rally above 1.2479 shouldn't be taken lightly.

On the other hand, further bearish move below 1.2350 will give the bulls another opportunity to re-surge at 1.2200 after a zigzag completion with the current dip from (b) taken as impulse wave. Price is most likely going to show strong signs of weakness at any of these levels. Spotting this weakness could be very profitable as price may make a headway toward 1.3 price region.