Get VIP Trading Signals Market Watch
Trade Now Your capital is at risk.
The process to buy bitcoin anonymously is pretty challenging for the investors comparing to ordinary online transactions. Everyone can see the transactions within the Blockchain and so investors find it hard to remain anonymous while buying Bitcoins. In this guide, we will show you the various methods to acquire Bitcoins anonymously.

Bitcoin is one of the top-ranked cryptocurrency in the world. Every transaction of Bitcoin is publicly disclosed on the Blockchain that requires identity verification by exchanges. It is easy & straightforward to see the tracking of Bitcoin. In this open world, the investor faces a challenge to remain anonymous while buying Bitcoin. However, there are methods to buy Bitcoin anonymously using the Paxful or Bitcoin ATMs. Furthermore, BitQuick is the place that does not require actual identity to purchase Bitcoins. To be anonymous, there are some tools such as Tor, coin mixers, a VPN provider, and more. 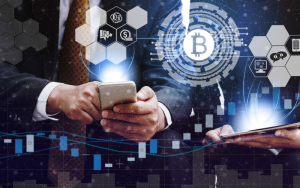 Bitcoin is not completely anonymous. Bitcoin is more private than credit cards but less anonymous than cash. All Bitcoin transactions are stored in a public ledger named as a blockchain. The information of the transactions includes the payment amount and the bitcoin address of the sender & recipient.

As the Blockchain is public data, anyone can see the Bitcoin payment that has a traceable history. However, History includes the bitcoin address, not any personal information. That is why the privacy of Bitcoin is called pseudonymous or pseudo-anonymous.

However, there is a way to identify a person's identity from the Bitcoin address. If someone has determination, time & resources to analyze, he would be able to find information from the Blockchain. This determination includes how many bitcoins an individual has, how they spent them, and how they receive them. Some precautions are needed to buy Bitcoin anonymously. This will help the user to prevent the actual identity associated with the transactions and addresses.

Before we go further into the ‘how to Buy Bitcoin Anonymously’, we need to understand why it is important to stay anonymous.

The first reason is Hacking. Hackers can hijack the information of the Bitcoin using the complex process from the internet. So being anonymous may reduce the possibility of being targeted by Hackers.

Bitcoin’s blockchain is made by cryptography, which prevents simulating and other types of fraud. However, the human element in Bitcoin transactions is always risky. Most Bitcoin wallets broadcast the real IP address of all transactions, which may use to trace the address. Many peoples are involving in the use of Bitcoin so it is very essential not to get hacked with the lose of money.

However, the way that most Bitcoin wallets handle change often results in various addresses within the wallet. As a result, one identity can leak information about other unknown addresses. There are certain ways to Buy bitcoin anonymously either from the internet or real-world, as mentioned below:

The ATM asks for the Bitcoin address to make the cash withdrawal. If the user does not have any Bitcoin wallet, it generates a new paper wallet to make the transaction. Then the user can simply import the private key from the paper wallet to send those Bitcoins to other persons.

What is the fee of Bitcoin ATMs? Most of the ATMs charge a fee between 7%-10%. Some ATMs do not mention the cost explicitly rather keep it hidden with the exchange rate.

This is another way to buy Bitcoin anonymously. To buy bitcoin using the prepaid card, the user should find the local sellers from LocalBitcoins. However, Bitcoin & Other ordinary VISA, MasterCard & PayPal are not the same things as discussed here.

There is a list of sellers in LocalBitcoins who are willing to sell their Bitcoins by cash. The user should find one of them and can buy Bitcoin using a prepaid credit card from them. Moreover, this system includes some local payment methods besides the Credit or Debit card payment.

The idea of Bitcoin Cash deposits is very simple, where the buyer and seller have to agree on an amount. The seller has to deposits the Bitcoins at a provider such as BitQuick. Then, the buyer deposits the cash into the seller's account, and the firm in the middle releases the coin. This process does not require any Verification ID except the Mobile phone number. It is easy to purchase a phone number with an anonymous email via Skype, for example.

Another easy way to buy Bitcoins is through cash arranged at physical locations. Buying Bitcoin by cash is easy and untraceable, as it does not require any documentation for the transaction. Some of such providers or platforms are LocalBitcoins or Paxful.  At Paxful, you can create an account and it requires an email address and verification ID. However, the verification ID process is optional. Similar like LocalBitcoins, Paxful allows the local payment methods besides cash and credit cards.

The more anonymous a person wants to be, the more effort he needs to surf the internet. Someone is looking to buy a few coins without tracing; he/she just needs to use cash. However, to be very serious about using Bitcoin anonymously, there is no other way than going through the trouble of becoming fully anonymous.